This pasture isn't big enough for the two of us!!

The spring grass is coming up, and I have been letting thee girls out for 1-2hrs at a time (after eating their breakfast hay) every couple days to stretch their legs and gradually introduce them back to the pasture, and to let the pasture grow up a bit (and be less sugary ;)

As I turned both girls out today, shut the gate and headed up towards the house, I heard a squeal - and turned around to an Animal Planet special on Wild Stallion fighting techniques. 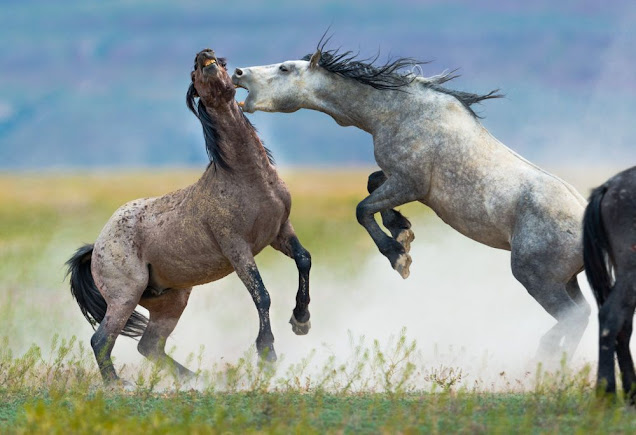 I legit saw this in real life (and horrifyingly more), but with my own two mares trying to decide who was now gonna be ALPHA. It was instigated by Porsche (who has lived in TONS of pasture situations and has always been the bottom or near bottom of the pecking order: I have never seen this behaviour or anything remotely like it from her...Tesla can get food aggressive with grain: but she is always very clear in her body language/alot of bluff; I haven't seen her get aggressive on pasture before)

I don't think I've screamed that much in my entire life.  I ran towards the pasture yelling NO!! and their names at the top of my lungs, sure at any second one of them would give the other a career ending injury.....I was throwing dirt/sticks/rocks at them and waving my arms like a crazy person: Porsche kept sneaking up and around to attack again: it was the most vicious thing I've ever seen in my life. I managed to find a pruned grapevine near the burn pile and started frantically waving it around (like a whip) and ran out into the pasture (making sure to stay a safe distance away, but also wanting to scare some sense into them with my "whip" while still screaming my head off.  I was finally able to shoo Porsche into a corner away from Tess: luckily I had left their breakaway halters on, so I snapped the leadrope and took Porsche up to the hitching post. I was shaking from the adrenaline and nearly puked: I haven't ever felt that helpless/angry ever in my life.

I hosed Porsche down, and inspected her injuries: It was ugly, but everything appeared to be surface : so I iodined everything and salved it, and put her up in the dry lot.

I grabbed Tesla out: she was definitely had a cling-on "Mom, I got bullied on the playground" attitude and feeling ouchy: but again, everything looked surface: so she also got cold hosed, iodined, and salved up. By then I had the sense of mind to take some pictures: (at the end, feel free to skip)

I'm still kinda shocked/traumatized over what happened - it was honestly out of the blue, and while I know they are not "friends", I thought they tolerated each other (honestly 2 days prior they were literally eating the same blade of grass together!?!) I did start Porsche on a Gut supplement, and have loved the results, she has put on alot of weight, is finishing her meals, and in general seems to be feeling better....maybe good enough to try and depose the current ALPHA?? Both girls have haynets nearly 24-7: so it definitely wasn't a hunger thing: the pasture is over an acre, so at any time either of them could have walked away to other yummy grass... 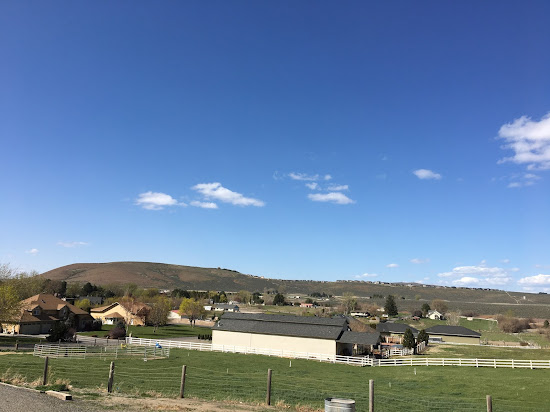 Moving forward: I think their shared pasture privileges are done. I will either split the current pasture, or alternate who get to be out in the pasture, with who is in the pasture round pen. so that there is always a fence line/panel or hot wire between them: I don't trust them not to duke it out again, cause it didn't seem to me that they had decided who the new ALPHA is....

Also, I had planned on more ponying adventures in the future: I definitely think that is off the table for these two from now on as well.

In the mean-time, I am keeping a hawk eye close watch on them, and ready to run them to the vet is anything looks suspicious. Both are eating and drinking, and hopefully the worst they take from this is a bruise/scar or two: I for one, am scarred for life. 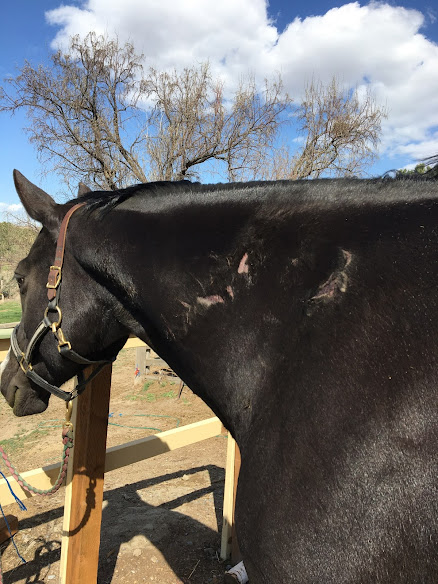 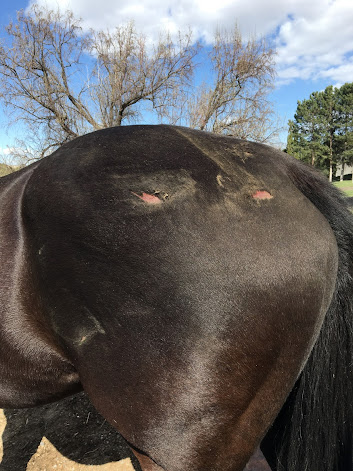 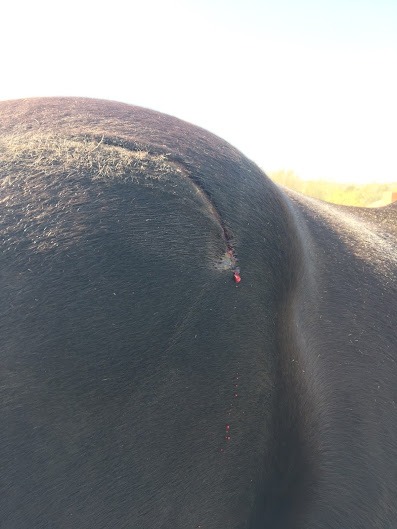