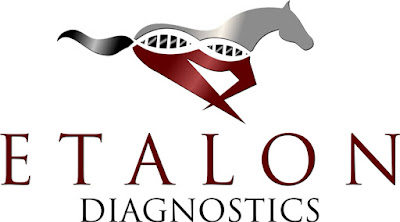 Part of my 5 year plan is to produce my next prospect from Tesla - and as step 1, I wanted to rule out any genetic red flags, and let's be honest, answer the question everyone wants to know: is she bay or black?

Here is a breakdown of the probabilities, based on the phenotypes of a chestnut dam and bay sire (and not knowing their exact genotypes) using the UC Davis color calculator: 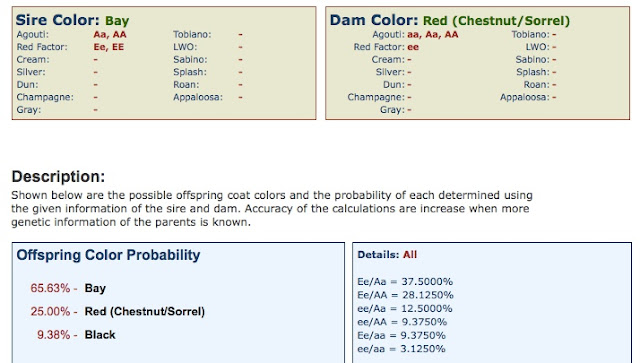 So the odds were definitely stacked for bay.

UC Davis also does color testing, but Etalon gives you the most bang for your buck, in terms of number of traits tested. I had a hunch of what to expect, but when the results came back that Tesla carried two gaited genes, was a lordosis carrier (swayback) and was a long distance endurance type.....ummmmm, that seemed kinda suspect.....so when I contacted the company, they agreed to do a re-extraction and a re-run of the diagnostics, (and told me that Tesla's results most likely had been swapped in human error with a Mangalarga Marchador that coincidentally had a very similar ID number as Tesla).

So, without further ado, what do the genes say?

2) Lethal white over carrier (I suspected from her crazy eye as it is common in paints) So, best to avoid a sire who is also a carrier (25% chance of a non-viable foal born with both copies).

3) One allele for susceptibility to West Nile - no worries - I keep those vaccinations up to date :)

4) Some alleles present from a preliminary study on fertility with no effects.

5) Two vigilance loci (is that PC for "spooky"? LOL) also a preliminary study. She is a "middle distance runner"...time to add a song to her playlist LOL

...I've definitely seen her outrun Porsche (who comes from a sprinter-type family of racehorses), and girl is FAST...

I definitely learned a TON about Tesla, and would totally recommend for learning a bit more about your horse!