Behind the Stall Door with Cruisen In Stilettos


Today we catch up with M. and her 8yr old APHA mare, Cruisen in Stilettos. "She's my accidental heart horse", says owner/rider M, "We actually originally bought her as a trail horse for my Dad." Her barn name, Tesla, was inspired by the all-electric-sportscar, and the fact that "All of our animals have a car theme",  affirms M. "Even the little cockatiel, Clutch!"

"I know, I know - the worst place for horse shopping!" M. laughs. "but I came across an ad on Craigslist, and I liked how she was put together so we drove out to see her. What impressed me the most was when we went to look at her it was absolute chaos at the place: dogs were even squeezing in and out of the round pen as she was trotting around, and she took everything in as cool as a cucumber, so I knew there was a good brain in there!"

Even Black Beauties can have a "Bad Yearbook Photo"

"It's literally the worst photo ever!" laughs M. as she pulls out the registration papers, "See?"


"She sure has matured slowly, so much so, she often gets mistaken for a warmblood!" M. remarks. "When we first got her, she was 3 and still making "baby mouth" at everyone. I should've known then she was just going to take her own sweet time to mature".  Tesla's sensitive side meant going sloooooow was the only way to go fast. "She was a bit too sensitive for my Dad, so I was more than happy to take over the ride, although Dad still jokes I'm a horse thief".

Tesla loves people.....and one other sportscar

Tesla is very much an in-your-pocket personality, who loves attention and cookies (well peanuts to be more precise) from two legged friends, but when it comes to other horses, she doesn't always play nice. "She can get food aggressive", M. admits "especially when it comes to grain. There's this line in an Iron & Wine song that goes "the mare in the pasture, pitch black and baring its teeth - and I was like, oh...wait...that's Tess".  But one special horse has caught Tesla's eye, an Irish Sporthorse named Bentley. "Of course she would like the only other sportscar in the barn", says M with a wink.

Having grown out of her teenage awkwardness, Tesla secretly wants to be a Dover Catalog Model

"It's true!" M. states, "She is so good about her clothes. I don't think she's ever ripped up anything in her life". 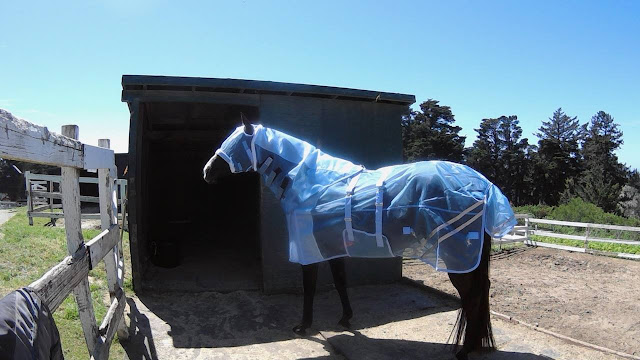 The future is looking bright

"Tesla is the first horse I've really brought along - a trainer put 90 days on her, but everything else has been me," M. says. "I definitely enjoy the process, and I've learned a TON in our journey together.  She wasn't a unicorn when I bought her, but she is certainly becoming one now. 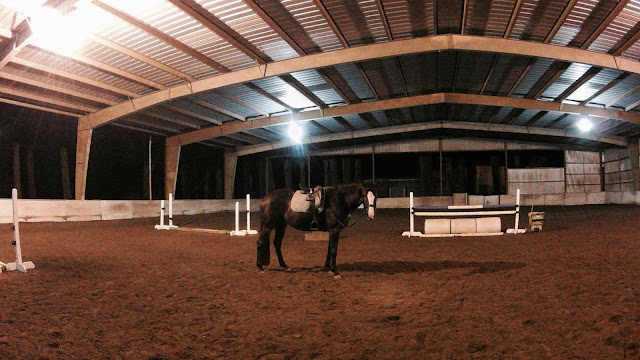 Special thanks to Tracy from The Printable Pony for sending the reporter my way ;)