As I was tidying things up last week: I stumbled on the clickers I bought a while back, and pulled them out for some fun! I have this one - which makes a nice loud click: 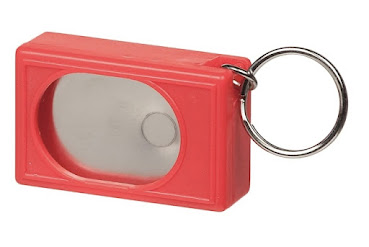 I clicked it a few times with Tesla, and alternated with "good girl" and snacks and she was super chill and caught on that it meant "right answer!" I also tried with my dog who apparently thought it was a new way to say No B*D Dog ....  oops!

I've been working with Tesla without the clicker (actually with the crinkle wrapper sound of starlight mints - lol - you can kinda use anything as a marker) to move forward towards things she thinks are scary and encouraging her to touch them. This has included, but is not limited to:

giant cardboard boxes, (funny story, she also "sits" in her rubber feed tub in the stall - I routinely catch her with one or both hind feet in it, and then bouncing it back between her feet so um, maybe she also wants to play soccer??) 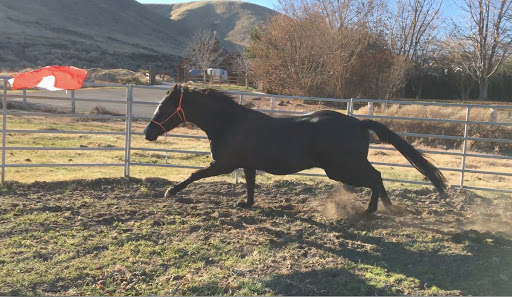 flapping flags (can't tell you how many times random neighbours have stopped asked what the flags are about - oh, you didn't realize it was a circus here? LOL)

So part of learning to go towards scary things was to touch things that I pointed out - and she is getting super good at that - she even lifts her lip, so I think I could get a smile installed pretty easily....

anyways, I was mucking stalls/runs the other day and the cutest little cottontail was snacking right outside the fence, so I pulled out my phone and was trying to get a cute pic...

when I heard hooves behind me, and suddenly Tesla was right next to me, and like an eel she squeezed herself between the fence and me (not pushy just an "I GOT THIS" confidence) and she deliberately and pointedly touched my phone with her nose. I burst out laughing - and realized I had installed some unintentional comic relief with my positive reinforcement, so friends, heed my warning and be careful what you click for ! ;)