Mother’s Day started out good,  I was doing some much-needed weeding(at pink x) and both girls were grazing in the pasture. 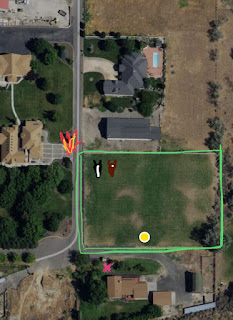 Here is the property layout, as you can see, the pasture(outlined in green) is kitty corner to the neighbours driveway...

Apparently there was a surprise drive-by Stay-in-place birthday party, cause suddenly the street was full of cars honking, and people started pouring out with balloons, both adults and teens.  Snoopy ponies gravitated to the corner to get a good look, but we’ve desensitized to balloons, so they were ok.  Suddenly there were fireworks/piccolo Pete’s/bottle rockets going off in the driveway and the horses LOST THEIR SHIT. I jumped up from gardening and started screaming “STOP, PLEASE STOP”....at the top of my lungs (so loud other neighbours came out of their houses...pretty sure they thought someone was being murdered (my folks later laughed that I was even saying please... I honestly didn’t even know what was coming out of my mouth, it felt like I was gonna have a heart attack)

the fireworks finally ceased and a woman yelled that they were stopping. I ran out into the pasture, and with help from the parentals was able to round terrified Porsche and Tesla up into the dry lot.

Thank God, no one was injured.

The party folks were very put out, and it was clear that they were upset that I was such a party pooper to have spoiled their fun. After 20 min of glaring in the driveway, they took the celebration and fireworks elsewhere...I guess they were waiting for me to tell them to resume? That’s a hard no.

Who thinks it is ok to set off fireworks in close proximity to any animals? Does nobody have common sense? Or a terrified pet on the 4th of July??!?!

Not one person asked if I or the horses were ok afterwards...even the adults who were present (if it had been a bunch of teens, I would’ve expected such irresponsible behavior). Having come from the Bay Area, I’ve seen my share of entitled behavior, but this one took the cake.