When a post popped up that there were openings at a local boarding facility, I decided to go take a look, "just in case". And while I wasn't wowed for the price, the location was super close to work, the pens/runs were generous, and the pens immaculate with water heaters for the winter. The owner/manager JW is a dressage silver medalist (working on her gold - going intermediaire 1).

I told her I would get back to her after checking my budget, and had filed it away, as a possibility, but I felt it was kinda overpriced for the area and the amenities (no lights, barn closes at 8pm)

But this week - things kinda blew up at Barn 5.

When I moved in, it was promised that my hay would be covered with tarps that BM's husband could get for free through his work. I took her at her word.

It snowed over the holiday, and I came out to barn to check on everyone/muck/do chores, and was happily taking pictures of the winter wonderland, when I turned the corner and saw this: 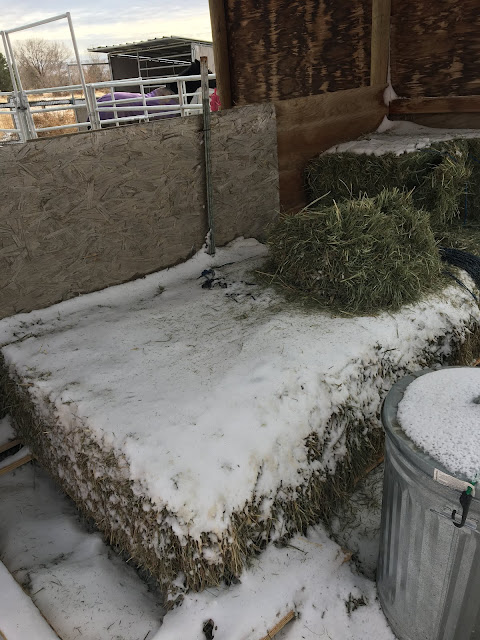 My remaining 7 bales of timothy were covered in snow/soaked. It was the bottom row - so it wasn't even like the top bales protected the bottom ones!

I texted the BM, and got a reply that she just found out her husband couldn't get the tarps, but they would put some tarps on it now. (ummm....kinda too late, lady? and also - if you have tarps, why didn't you cover it before it got snowed on??)

Literally every store was closed, so there was nothing I could do but feed it for dinner/breakfast.

My usual supplier (gosh sounds like drugs LOL) was away for the holidays - so I called around the next day to all the local farm stores and found some Orchard grass for $18/bale (highway robbery for this area!)

At this point a lot of things were running thru my mind....including all the things that had been promised when I first came, but had failed to materialize (like chains to close the paddock gates (I've been tying their lead ropes to "lock" them in), or picking up of full muck buckets (I've taken to using the wheelbarrow and just hauling it down to the muck pile myself) or blanket changes: (there have been "miscommunications" every. single. time)

As I was mucking I peeked in Tesla's water bucket and saw it was incredibly low...I texted the BM, and got a reply "that she was aware", then several paragraphs about using colanders to strain it (I could find it in the barn if I wanted to use it, etc.) and ice skating when she dumped it...I got lost in all the excuses, honestly.

I texted BM that the girls were to get the hay I'd packed in nets - not the soaked stuff, and I got a snarky text back trying to pick a fight. No way lady, final straw.

This barn is basically a parking lot. I am doing all the heavy lifting in self-care (mucking stalls, sourcing hay, etc.). I am more than happy to do the hard work even extra work: the entirety of BMs responsibility honestly is hanging hay nets (I usually fill) and providing clean water, so I fully expect those things to be done. No excuses.

I made up my mind right then and there that $$ was just $$, and if I stayed, then I would have zero peace of mind.

So I called up Trainer JW - and the two spots were still available, so we are moving to Barn #6 on Sunday.  OMG, 6 barns in less than a year - this is like some bad equestrian comedy show!

Wish us luck, I'm the one who needs Gastroguard now.... 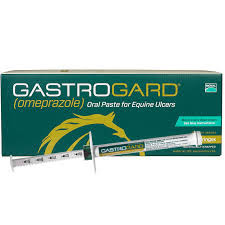