Soft touch chiro fail but TTouch for the win

At Tesla's barn, a "soft touch" equine chiro was coming for a barn visit on Friday. The girls all raved about her magic touch so I decided to go ahead and schedule Tesla for a session. Tess had seen a chiro at the old barn and was absolute putty in the choir's hands by the end, so as I am bringing her back into work, I wanted to start everything out on the best possible hoof ;)

The gal ran her hands over Tesla's back and told me: "Saddle fit is a huge problem here" and I flatly told her nope, a saddle hadn''t touched her back for ~6 months with my move and snowmageddon so that was not what was going on....

She kept suggesting things: residual saddle issues, the long trailer ride, the snow, (to be honest, it kinda started to feel like talking with a psychic...)

About 5 minutes in, I realized I was actually paying for a Masterson Method session (which is OK - but something I can do myself, so, I probably won't be using that particular chiropractor again). 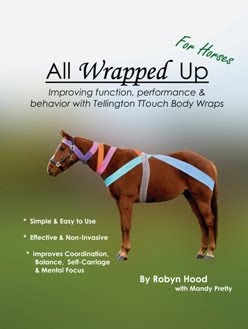 The bodyworker finished up, and when Trainer A. came over, the two proceeded to talk about how Tesla was out all over, and saddle fit problems... awkward...I felt a bit like a kid when adults talk about you when you are still in the room...

so overall, I didn't have super high expectations for my TTouch lesson on the following Saturday morning.

BUT,  it was amazing and just what Tesla needed.  I've known that Tess has struggled with body awareness, but wasn't sure how to help her....and Trainer A. suggested TTouch.

Trainer A. first had me work on getting Tesla to transfer her knowledge of head lowering to poll pressure to head lowering to lead rope pressure. I had been taught to lead horses from the shoulder - but Trainer A. highly recommended leading at the head from her experience of working with unbroken colts (so I needed some retraining too LOL). Then we wrapped her up in the TTouch bands and put her through some exercises to help with body awareness. We both remarked how Tesla had no idea where her hind legs were and the Labyrinth exercise was really making her slow down and think it through and was mentally HARD for her.