I headed out to the barn on Sunday afternoon - icy mud season is here, so it's been hard to actually work Tesla at all: she's been a bit of a fire-breathing dragon, but I do like to bring her out, give her a good grooming/stretch, and let her roll/walk a bit in the round-pen.

This little guy was super cute in his tiny winter coat, and as I walked Tesla over to the round pen, he wanted to help. He was trotting politely beside me, then he thought jumping was more fun and was hopping up to touch my hand, then he leaped WAY UP into the air and snapped at Tesla's face and she was like GAME OVER.  She was whirling and then slipping in the mud/snow:  She tried pretty hard to nail Mutty and I did my best to rein it in, but she came within inches of ending him.  Just when I would get her walking forward and listening, the little instigator thought it was great fun to get her stirred up again. Trainer A noticed the kerfuffle (and probably my loud "NO"s, and called Mutty over: he didn't want to leave the good time he was having LOL. Finally, Trainer A. grabbed him: enough fun for one day, little man.

After we worked a bit in the round pen, she was still a hot mess, so I let her cool her jets in the crossties while I helped with some mucking.

When I saw her ears finally go like this: 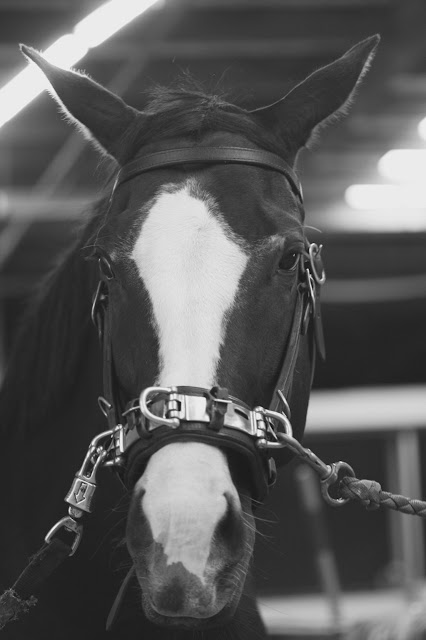 I knew she had finally settled herself, and I pulled her out of time-out and put her to bed for the night :)

Whew! Can't wait for the footing to dry out!