I gotta say, I was a bit nervous getting the girls ready for the big haul to New Adventures.

The furthest they had ever travelled had been a few hours tops. I tried to plan as much as possible, and part of that included getting health certificates & Coggins, there was a new equine vet and imagine my horror when I went to pick up  all the official paperwork and it was full of errors. Wrong owner. Wrong breeds. Wrong horse name spellings. It was all federal paperwork, so no changes could be made, I was leaving the following day, so I couldn't schedule another blood draw for a corrected Coggins: I talked to the vet personally, and how this was absolutely unacceptable: he told me there was a government shut down and I wouldn't be stopped....(!!). Needless to say, if I had stayed I would've changed vet offices - my Mum sure did take her dogs elsewhere!

So on that auspicious start, Trail Boss and I decided to load them up at ~2am, and go for a straight-shot haul with 30min. breaks every 4 hours, for a total of ~14hrs on the road. The weather had been super stormy in CA, but there was a break in the pouring rain and 50mph wind gusts - so we decided to go for it!!

Porsche always surprises me, but she was super happy to come out of the pasture at 2am (maybe she's an early bird from her track days LOL) and loaded like a champ. Tesla took a bit of coaxing, but once I put the grain pan on the floor we were in business.  I brought ~2bales of hay, in haynets and an unopened bale. Several bales of shavings were spread to make it super inviting, and Porsche got dosed with Quia-Cal, which really seems to work for her in taking the edge off. I brought some rice bran and German Muffin Cookies: Tesla will take her grain super sloppy, and I figured if they got picky about the water taste, I would add some goodies to it.

We were making good time, smooth sailing until we got to Shasta....then I was not expecting; 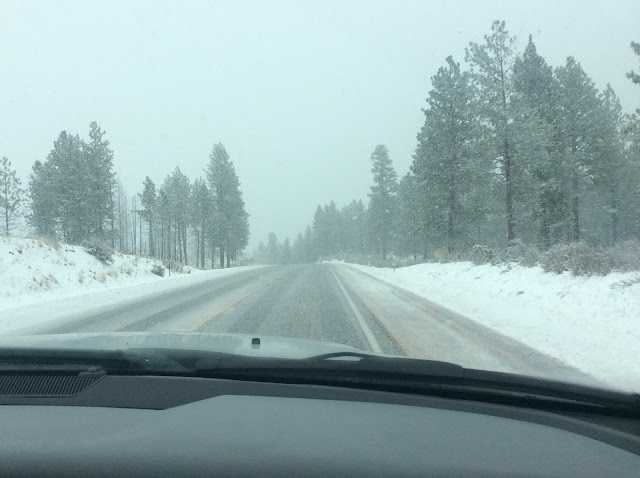 Snow. and ALOT of it! 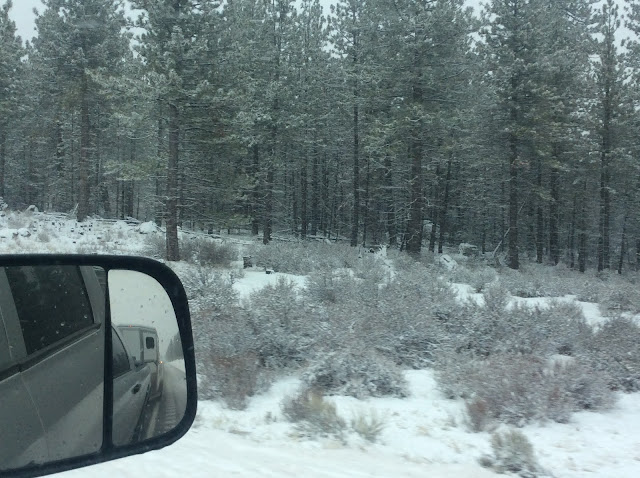 Luckily Trail Boss is an experienced driver in all sorts of bad weather conditions: he kept it slow and turned on the 4WD. 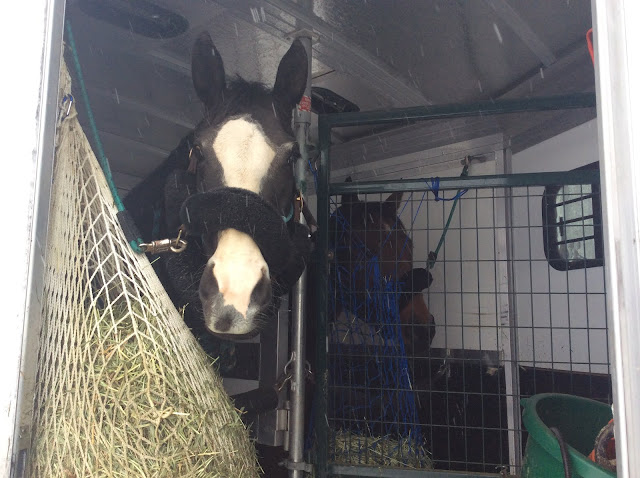 The girls had the fuzzy halter covers, and some brushing boots and bell boots, but other than that they were naked. I didn't want anyone to get tangled up in blanket straps - so I left them off (but had them in case if they got too chilly.....the Jamco held their body heat surprisingly well, so they were nice and warm inside.

Both girls had a great attitude: they were munching away, and bright-eyed and bushy tailed.  Tesla was super good about her food: sometimes she can get food aggressive, but she must not have thought Porsche could reach her, cause she didn't get fussy at all.
Everyone was pooping well and drinking well: and no tantrums: I couldn't have asked for better travel rockstars! 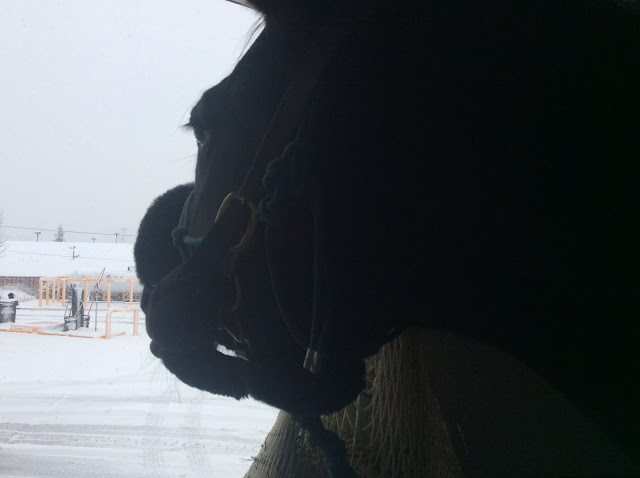 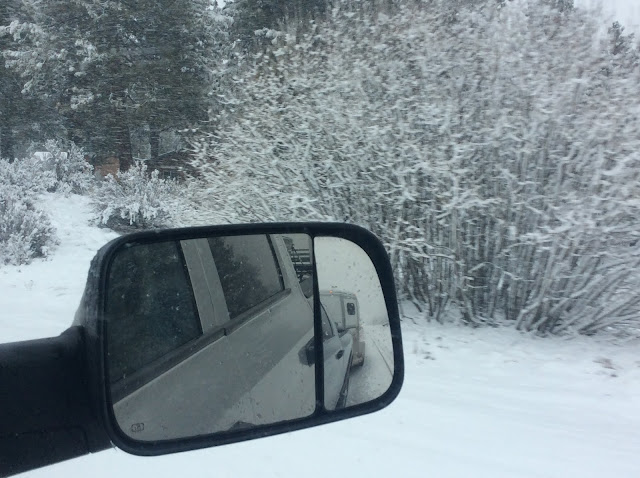 Because of the slow going, and an 18-wheeler accident that blocked off one side of the highway for awhile...we were quickly running out of hours: and the girls were getting pretty tired and needed a break (us too!). So we made an unplanned stop and spent the night in the truck in a Walmart parking lot: the snow had become rain by that point. The girls spent the night in the trailer, as there was no safe (or dry) place to unload - but they were good as gold (only one protest kick all night from Porsche lol).

Tesla wasn't as big of a drinker as Porsche on the trip - but one little trick I tried seemed to help: I left the water bucket in the trailer while we grabbed dinner, so they could smell it was there and have time to process "hey I'm thirsty" and when I came back and offered it to her again, she drank a TON.   Silly girl! 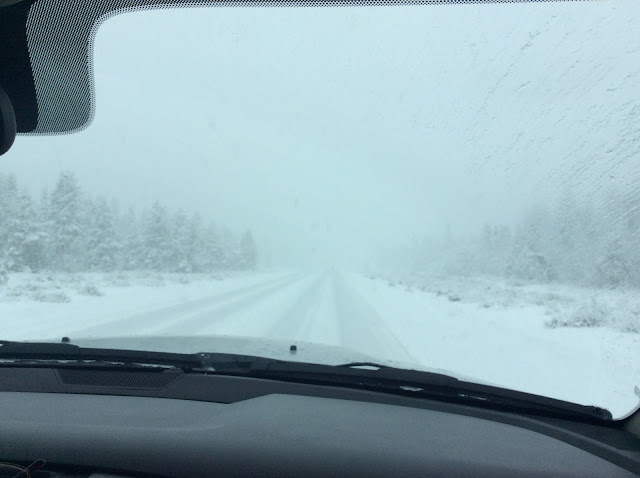 Running on mostly Coffee fumes, we headed back on the road after giving the girls a full 10hr break for the home stretch. (they were definitely in better shape than us at that point ;)


We dropped Porsche off first at the co-op barn: Tesla was SO GOOD about waiting by herself in the trailer, snacking quietly with no screaming. Porsche politely introduced herself to her new neighbours: a 25+yr old Arabian, and her newest boy crush, a dressage gelding (oh, Porsche!)

Tesla had a 20min. more ride to her drop off location and was chill as a cucumber. Her new neighbour, Spicy, definitely lived up to her name and there were some airs above ground. I wondered if Spicy would stir Tess up, but she was super mellow even with all the antics happening around her.

This facility has electric fences - something Tesla has never seen before. She touched it once with her nose, and I actually think the POP noise scared her more than the light shock: she is very very respectful of the fence: you don't have to tell her twice!


Both girls are settling in and none the worse for their 24hr+ trailer ride. The cooler weather probably helped, both girls had super tight legs with no signs of stocking up. I absolutely can't say enough good things about the JAMCO trailer - best purchase ever!! The extra height and width made all the difference in the girls' comfort: