The other evening I was working Tesla in the arena - I was hand-walking her over the jumps set up in the arena, some cross rails, and there was one gate about 18in (so still plenty walkable). I had walked her over them the night before, easy peasy - in fact, she had initiated the game by locking on to the cavaletti and wanting to step over them (maybe wants to be a hunter/jumper?)

As we went towards the gate, she got one leg over, then suddenly had second thoughts, and scooted backwards, stepping through the gate, pulling it under all four feet. I released the lead rope to let her have her head and she untangled herself as the gate splintered into pieces. She started to bolt and I called out "WHOA" loudly but calmly, and she came to a dead halt and let me go collect her (whew for all those hours in the round pen). 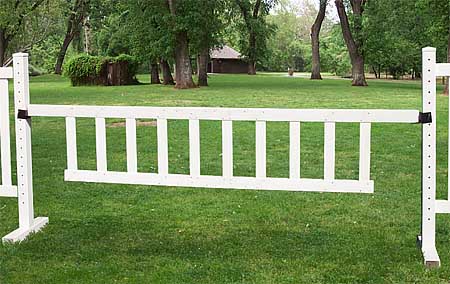 I ran my hands all down her legs: she had a few scrapes but was miraculously unhurt. This is how that vinyl looks when it cracks: Yep: sharp daggers!


I picked up every shard in the arena footing - and then made Tesla walk over all the fences again, just to make sure we ended on a good note and that she didn't have any residual fear: that was a good move, as she was a bit spooky over the first few. I did alert the trainer whose fence we demolished - and I have replaced it for her.  She was very kind about it - and did explain that this sort of jump should be used with a pole above it (so the horse would hit the pole, not the gate), and that a horse had to have a lot of confidence. She picked out a new gate with smaller spaces - so that subsequent horses would not put a hoof through.

I was upset with myself for having put Tesla in such a situation - in retrospect I should not have put her over such a fragile jump at this stage in her learning - the poles are much better as she can knock them down with much less chance of injury. The following day we walked around the property, and I wanted to make sure that her confidence in me had not shattered like the fence.

As we were walking, a loose big dark horse came running towards us. Tesla went on high alert, jumped behind me, and then froze. The horse flew by into a patch of green grass, and the owner came running over to apologetically collect him. While the situation was scary at the time, I was very proud of how Tess handled it - she looked to me to protect her, and then we went on our merry way as if nothing had happened.