My dear barn friend (and seasoned show extraordinaire) helped to make my first show an amazing one!! I learned so much: about how to prepare, about what Porsche needs to be on her top game, and of course, about riding!

Between the two of us we pulled together a show outfit :) See those blinding white breeches? C. had been given a beautiful pair of Pikeur breeches with a few stains - and I followed Nicole's How To Guide (followed by a bleach spot treatment and some quality time out in the sun - and I got every last rust/boot polish stain off ;)

We made the decision to go ahead and rent stalls for the night, since we were gonna be there all day anyways (my classes were early and C.'s were late in the afternoon) - so we drove Porsche and Bentley over (both loaded and trailered beautifully YAY!) Day stalls: totes worth it! I walked Porsche all over the grounds before I put her to bed (I know going from pasture to stall can be rough for her)

My dressage class was at 8:20am - I got to the barn by 6:30am and fed Porsche and Bentley breakfast and mucked their stalls. At C.'s recommendation I wore yoga pants over my whites (GENIUS!).

I had planned to braid (big fluffy dutch braids as per Guinness on Tap), but Porsche was a bit on edge - so I hand walked her instead. I think she thought the horse park was just a giant trail ride - lol - cause she was thoroughly enjoying snooping and looking all around. She's always loved adventure.

I wasn't sure how much warm-up she would need, but we got in the warm up ring about 20min. before the class. In retrospect, I would've warmed up for ~30 just to make sure she was nice and  relaxed and bendy.


Last time I was in this ring I was playing polo.... 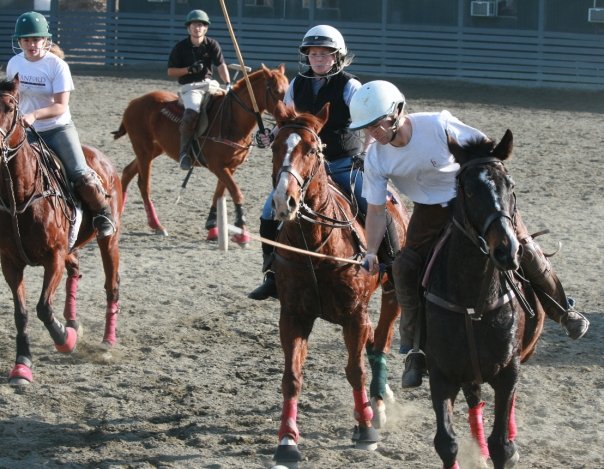 I made a few circle edges into corners, and wasn't really able to get her as round and supple as I can at home. Her mouth was busy (I ran out of the rubber Sealtex and it was on backorder at RW), but we killed it at the free walk (and scored an 8.0!). Our halt was SO square - just a tad bit tilted (so close). The judges comments were that I had an athletic horse (lol - looks even more so when you are competing against kids on ponies haha) and that I need to work on roundness and suppleness (yup yup!)


Then on to the stadium portion. Over the first practice jump in the warm-up area I did a greenie mistake and looked down at the jump, so Porsche looked down too and then mule jumped over it - I lost both my stirrups but not my seat and Porsche slowed to a halt - cause she could feel I needed a bit of hand-holding (Mares, they always got your back :)

Right before our round, a beautiful paint horse got loose, crashed through a fence onto some astro-turf, and then lost his footing and went flying thru the air and landed on it's side. The horse got up, and proceeded to do it a few more times before folks could catch it. It was like watching a train wreck - no-one wanted to watch, but we all couldn't look away!!! (I heard later that the horse was roughed up, but OK! so I definitely had some extra nerves headed into our round...which was actually the first time I had done more than 2 jumps in a row as well...


Again, lots for me to work on position-wise, but besides the little baby spook - Porsche was a CHAMP! She was even doing her little "happy" snorts ;) 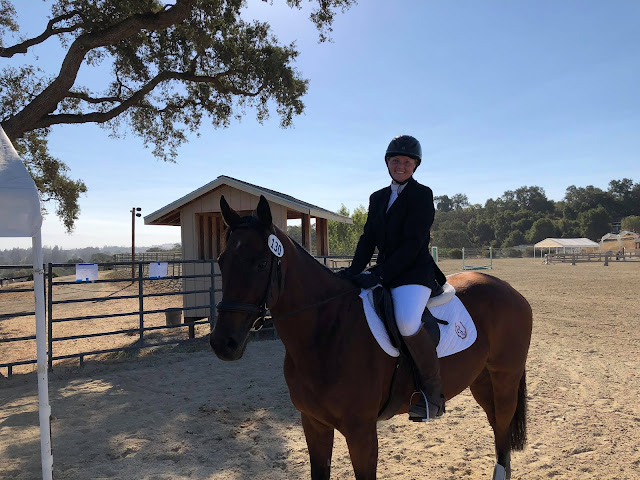 Since the stadium round wasn't timed, we finished on our dressage score and tied for 1st (against a seriously adorable shetland pony I gotta say!)


Then I got to play videographer/groom for the rest of the day, and give C. any help as needed (which wasn't much - but I definitely can be a good cheerleader ;)

A day full of good memories :)

The summer has flown by and I'm long overdue for an update. I left a very toxic job situation early this year. It honestly sucked the life out of me physically and mentally for several years, and it has taken me a minute to regain my footing (even in a new wonderful supportive position with a company I love) to feel like 'me' again, both in and out of the saddle. I've chosen to change my point of view and focus on the positive, rather than the closed doors (owning and riding horses in this area is baffling at times) but I'm going to make the best of things where they are at, and get back on the horse, figuratively and literally. Porsche is improving in leaps and bounds; she continues to gain muscle and strength in the right places as she improves her posture and self-carriage. Celeste, whose Balance Through Movement Method has been life-changing, is doing a clinic in my area next month - so I signed Porsche up, and am looking forward to our 1:1 to specifica