Even tho' my barn is technically very close to trails, there is a busy, winding mountain road on a blind corner that surrounds it on 3 sides, and a little bunny trail that is parallel to the road (marked in red) 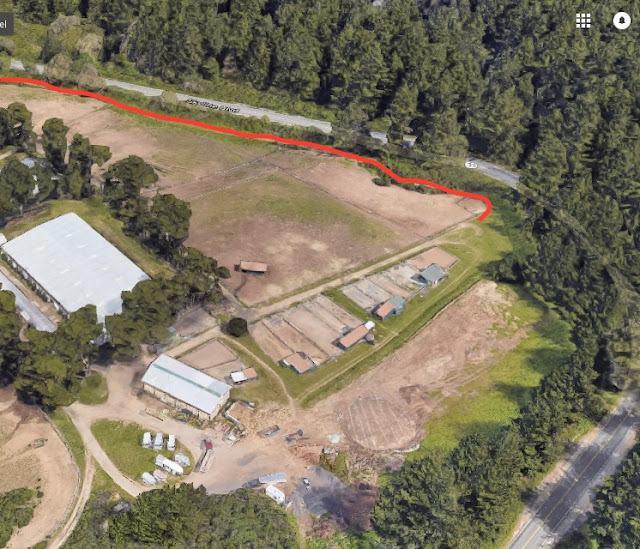 I've been on this bunny trail before with both Porsche and Tesla. Both girls I would consider to be very good about traffic: Porsche was ridden all over the downtown at a previous barn (we even had a motorcycle backfire next to us and she only flinched), and the pasture at my parents is close to a very busy road. Traffic desensitization? Check!

A good barn friend, A. asked if we could go for one last hurrah trail ride before she moves to a new facility in January (sad!!). Her horse Aria can get a little fearful on trails alone - so I said Porsche and I would show her the ropes! I wore my bright red breeches, put on our reflective boots and little western saddle and off we went!

Everything was going well - we did the back loops on the property and then headed for the front bunny trail. Both girls did great even when one horse in pasture got super friendly, and came charging straight at us. As we headed towards the end of the bunny trail to turn up the main driveway, I heard the unmistakeable sound that brings terror to any equestrian:


I don't care how bomb-proof a horse is, a giant white blur flying by at 100 miles per hour squealing like a pig is legit terrifying. Both girls panicked and bolted - Porsche went straight for the road, but some thick brush brought her up (as well as my full weight on her mouth). Luckily, neither A nor I were unseated. I could feel Porsche's heart thumping out of her chest (and I can count on one hand the number of times that has happened before) We managed to settle the girls enough to get moving and decided to get outta there as quickly as possible, when we heard the sportscar coming back in the opposite direction!!! (Coming to finish us off....) We managed to scramble up onto the driveway away from the road before the car flew past, and although they both spooked again, it was way more manageable with a bit more space between us and the screaming death machine.

Both girls got lots of pats and praise for being so brave, and we finished off with a loop behind the barns to end on a good note.  A. was able to laugh it off, but I 100% do not enjoy putting myself, my horse, and a fellow equestrian in a situation like that: riding horses is dangerous enough as it is.  I can't even imagine what would've happened if I had been on Tesla. She probably would've outrun the Maserati, #funnynotfunny

Several barn gals have tried to talk me into riding up that road to a nearby trailhead, but after this experience I'm putting my foot down. Speeding cars are very common on that road, with an average of 1 fatality per month when someone loses control. There is no safe way next to cross or ride alongside that road, so my horses and I are giving it a wide berth from now on.