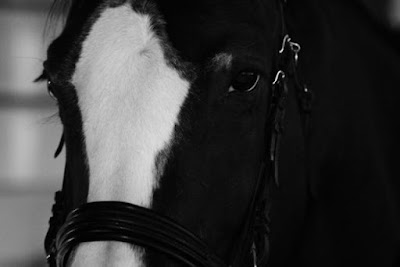 As I was longing Tesla earlier this week in tack, one of the stirrups untied and flipped over to the other side during a messy canter transition, so that the metal was clanging on metal. I thought: this is a great opportunity to desensitize, and continued to work her - but, when I asked for trot the stirrups clanged and she thought I was asking for *more* speed!  She was running SO FAST like a motorcycle rider who leans into the turns, that I thought she might just tip over. She was genuinely terrified and/or thinking I was asking her to GO! I eventually got her settled, but when I got home that evening, I promptly ordered a little tinkly bell from Riding Warehouse: 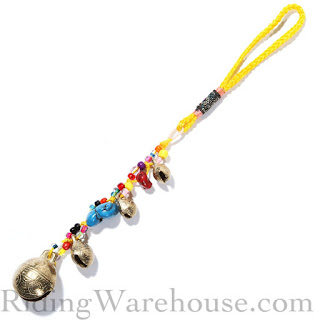 and I am going to work on desensitizing her to scary saddle sounds...eventually working up to a cowbell and/or stirrup clanging. MOAR COWBELL. We've also been working on "Whoa" - and in fact when another instructor was giving a lesson tonight and yelled "Whoa" Tesla promptly stopped in her tracks - too smart for her own britches that one, hehe.

The summer has flown by and I'm long overdue for an update. I left a very toxic job situation early this year. It honestly sucked the life out of me physically and mentally for several years, and it has taken me a minute to regain my footing (even in a new wonderful supportive position with a company I love) to feel like 'me' again, both in and out of the saddle. I've chosen to change my point of view and focus on the positive, rather than the closed doors (owning and riding horses in this area is baffling at times) but I'm going to make the best of things where they are at, and get back on the horse, figuratively and literally. Porsche is improving in leaps and bounds; she continues to gain muscle and strength in the right places as she improves her posture and self-carriage. Celeste, whose Balance Through Movement Method has been life-changing, is doing a clinic in my area next month - so I signed Porsche up, and am looking forward to our 1:1 to specifica