TRM Bloghop: Porsche Before and After

This before and after is one I rarely talk about...where, in being new to full-care board, I learned a very hard lesson, that nearly cost me the sportiest little ride ever...

And this is what she looked like after 4 months at a full-care facility:

I had Porsche at a full-care facility with a leaser taking lessons, while school was cramping my time at the barn...She was supposed to be getting 4-5 flakes of good quality hay per day. She is not a hard keeper. There were some major red flags in hindsight - bad communication between the groundskeeper & the owner, a recent exodus of boarders, and a miserly facility owner (who was also dangerous in how he handled horses - his girlfriend ended up with a broken nose when his young filly was being ponied behind a cart on the road and pulled back & broke the longeline clip which went straight into the gals face ( I dunno how she didn't lose an eye!!) I was able to grab the filly before she went into traffic.....the whole thing was scary and unnecessarily dangerous!

I found out later that not only were they skimping on her hay (cause she was small - she obvs didn't need as much, right?!?) and piling her hay in her uncleaned stall (they only cleaned stalls right before lessons, so boarders saw a nice clean area) - so she wouldn't hardly touch it, so they fed her less - you can see the downward spiral...

I was supplementing with Stable-Mix, and I honestly believe it was the only thing keeping her alive. She held pretty good weight, and in my ignorance I believed what the BM told me she was getting, and chalked the fluctuation to changing weather/work, etc. but then she suddenly plummeted - so fast I was sure she had some horrible incurable disease - and I called the Trail Boss to come fetch her back home. I remember driving behind the trailer - I could see she was slumped up against the side, so weak and I bawled my eyes out.

We had the family vet out - they ran all sorts of bloodwork, and found nothing but malnutrition (boy, was the barn owner upset when I posted the diagnosis to the barn email list)

My folks literally nursed her back to health over the course of several months, giving her pasture turn-out and a diet to carefully bring her back to normal (and prolly a little extra fluff ;)
(and Porsche knows it too - she always whinnies at them both <3 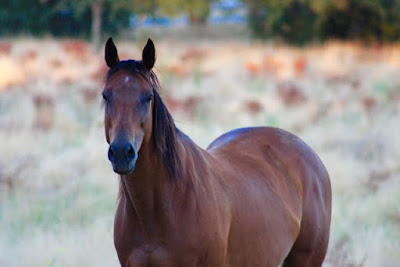 I'm glad her before and after has a happy ending!!